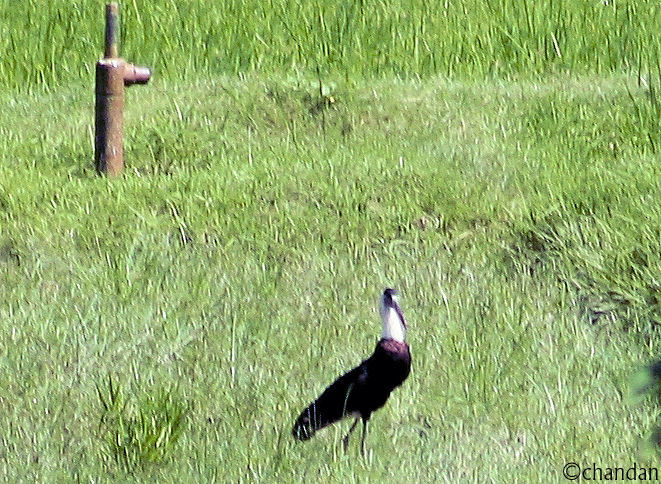 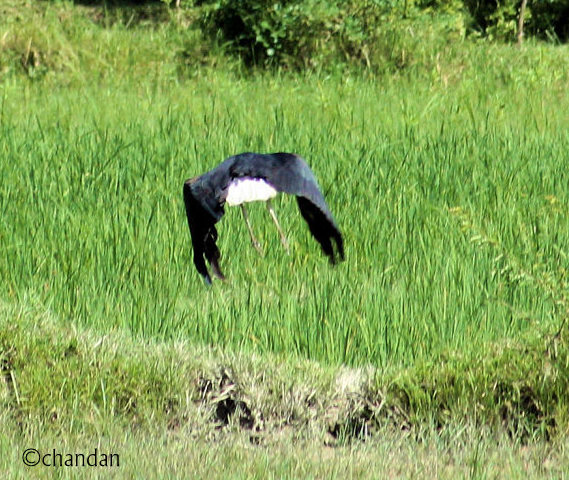 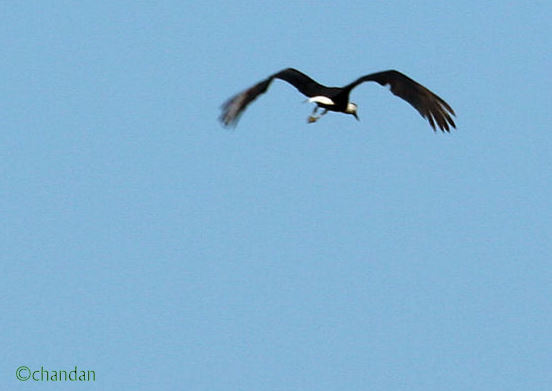 The Woolly-necked Stork,( locally known as Dokhar डोखर) Ciconia episcopus, is a large wading bird in the stork family Ciconiidae. It can also be known as the Espiscopos.

It is a widespread tropical species which breeds in Africa, and also in Asia from India to Indonesia. It is a resident breeder in wetlands with trees. The large stick nest is built in a forest tree, and 2-5 eggs form the typical clutch. This stork is usually silent, but indulges in mutual bill-clattering when adults meet at the nest.

The Woolly-necked Stork is a large bird, typically 85 cm tall. It is all black except for the woolly white neck and white lower belly. The upperparts are glossed dark green, and the breast and belly have a purple hue.

The main threat to this species in South East Asia is severe habitat fragmentation. The species has also suffered population reductions as a result of habitat destruction and shooting.

Pictures were taken near Selibeli (Kothi Haat) in Madhudani district of Bihar, India. 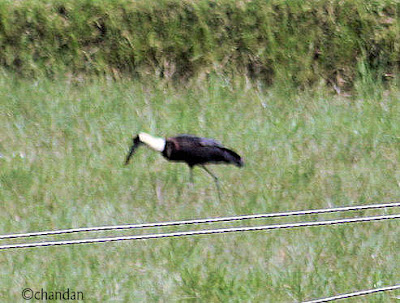 Posted by Chandan at 12:33 AM 3 comments
Email ThisBlogThis!Share to TwitterShare to FacebookShare to Pinterest 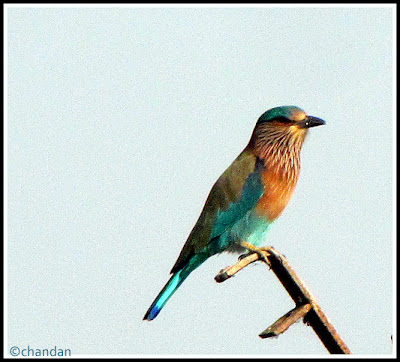 Indian Roller  नील कंठ
The Indian roller (Coracias benghalensis) is locally known as "Neel Kanth " and is chosen as the state bird for the Indian states of Bihar, Karnataka, Orissa and Andhra Pradesh.

The local name of this once often sighted bird is Neelakant ,नील कंठ (meaning “blue throat”), a name associated with the deity Shiva (who drank poison resulting in the blue throat). During former times, a captive roller would be released by the local ruler during festivals such as Dussera.

Its a beautiful sight to see the birg in full flight..the flashing twirling shades of blue in the sunlight are mesmerizing...one needs a lot of patience, bit of luck and a fast lens..one day I will get this beauty full frame in full flight.
Posted by Chandan at 9:43 PM 2 comments
Email ThisBlogThis!Share to TwitterShare to FacebookShare to Pinterest

Everytime I go into Kosi flood plains, there is always something positive to learn,a bit of fear & a lot to be thankful about.
This time, while going to Madhepura we were confronted with a dead bridge. The B.P.Mandal Setu is a newish rcc bridge,perhaps more than a kilometer long. Its situated on NH 107 and joins Madhepura with NH 30.The bridge has been closed recently as the midspan support pillars have sunk in.
Thus, to go to madhepura,if you have your vehicle,easier option was to cross the river by a boat. These country made boats are fitted with a diesel engine commonly used for pumping water and modified to drive the propeller.
Portable ramps made of bamboo are used to load & unload the vehicle. Once the vehicle is loaded,it is secured in its place by wedging sandbags or stone blocks in front of its wheels.
Its not the best looking boat, but its sturdy and it works. We loaded our 2.5ton vehicle on the boat..and it creaked and jarred all the way up the deck where it was secured.
As the engine caught on, the steady diesel engine chatter was reassuring,but it did not remain that way for long..about two third way down the river, the boat hit a sandbar and lodged itself right into it...and the over strained engine spluttered to a stop.
The boatmen then tried to make a under current channel by using anchors to scrape sand and directing the undercurrent of the river to dislodge the boat. The strain on the anchor was too much & the anchor broke. Having no other option, the elder of the two boatman waded through the river, went to his place about a a km away and hauled a heavy anchor all the way back to the boat and replaced the broken anchor.
They again started working the current towards the boat and finally after about two hours, the boat was free.
These guys have shown immense courage and presence of mind apart from the boating skill they grow up with. No wonder, guys like them saved thousands of lives during the floods. For them water is life & boats their livelyhood.
They did not accept any extra money and were happy with whatever rates the government has fixed for them. It was humbling to see the amount of work they do,the kind of risks they take & yet happy & satiated with what whatever life has offered them.

Posted by Chandan at 10:00 PM 0 comments
Email ThisBlogThis!Share to TwitterShare to FacebookShare to Pinterest 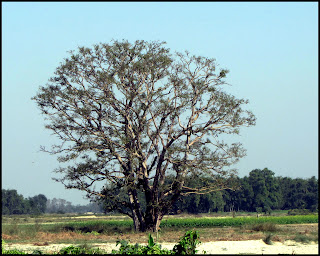 The basti of Bhanwartola comes under Sinduwari ward (15/16) of Shahpur Panchayat ,Gwalpada block in the district of Madhepura,Bihar. This settlement of around 400 households resides now beside the canal embankment.These people lost everything during the Kosi flood of 2008 and were residing on the embankment for almost two years before their houses could be built, hand pumps installed, buildings repaired.
There has been noticeable change from almost a year back when we were here.At the beginning of east canal  embankment, we saw construction work going on the culvert and sluice gates being worked on and replaced. After driving a few kilometers on the embankment we reached Bhanwartola.
The first thing one noticed was that the school building was repaired almost new and about 40- 50 children were having mid day meals in the courtyard. It was a heartening sight..this place is really in the interiors, difficult to reach and it was nice to see Government agencies working here.

The region is still overwhelmingly covered with sand carried by the flood waters,but sparse vegetation has started dotting the landscape. Some farmers here are trying to grow vegetables, mainly 'Parval' as that's suited to this new soil layer. Earlier,the farmers predominantly grew food grains & the yield was nice. They hope a good year of rainfall will slowly bind the soil together & better options for farming will be available. Incidentally, after the floods,rainfall has been scarce in this region
We had been in touch with the ward member Mr.Upendra and he had prepared a list of beneficiaries who needed the blankets most. They were mostly old people, masomaat or widows and people from poorest section of this basti.These people were earlier given a stamped piece of paper bearing their name/representatives name which they submitted to us after they received the blanket.

In all, around 200 blankets ,400 odd set of clothes & 100 set of woolens including shawls, woolen sheets, bed sheets, winter caps, scarves etc for for women & children were given out to the beneficiaries. We had carefully marked & packed each dress set separately for different age groups. We distributed the relief materials to everyone who was there at the site.
Acknowledgment in the form of thumb impression/signature were received on the beneficiaries list.On way back we gave medicines & old clothes to people of Laxminia village who had called us about a months back and asked for specific medicines.

This effort could be carried out because of people like Ms Bhawna Agrawal(Tempe,AZ) who sent us funds for 150 blankets and by members of our group namely Saroj, Agnivesh & Sunil Singh (US),Divyanshu Ji ,Dilip Ji & Ashok  sharma(Bangalore), Anand Guneshwar (Gandhinagar) & Vivek (Singapore). The details are at this link http://bit.ly/gBgWjI
I would specially like to thank Bhawna Ji for taking the initiative and contacting me and offering to help with purchase of blankets for these people, to Ashok for always being there to help and to Amitesh Ji from Prayaas for all the help he has been providing for this initiative for the last three years.
Posted by Chandan at 3:53 PM 0 comments
Email ThisBlogThis!Share to TwitterShare to FacebookShare to Pinterest

Anupam Mishra:
The ancient ingenuity of water harvesting | Video on TED.com
Posted by Chandan at 9:39 PM 0 comments
Email ThisBlogThis!Share to TwitterShare to FacebookShare to Pinterest